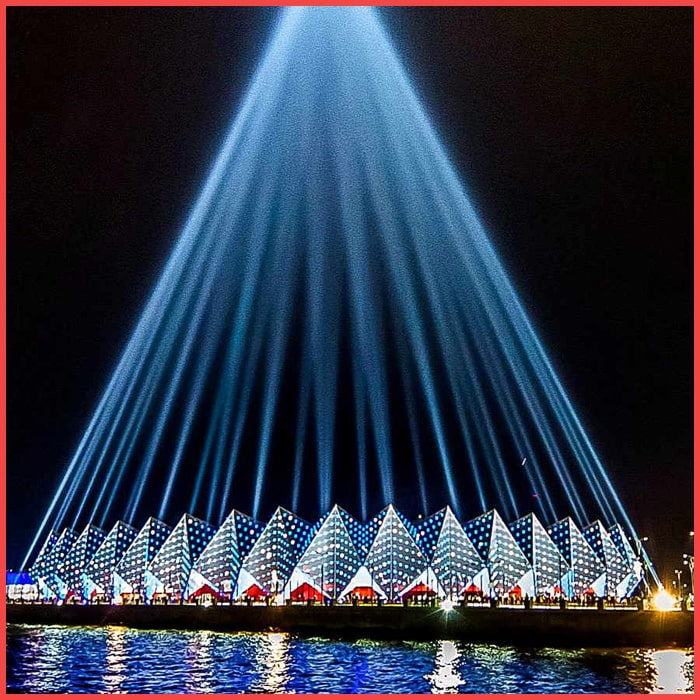 Day 1: Baku
Guests have a meeting with the members of our company in Baku, in the airport. Then goes the tour along the city, but first we arrive at the hotel. Then we have lunch and get to the city trip with visiting of the most peculiar places of the city. This is the capital of Azerbaijan and the city has sightseeing of old and modern parts. First of all you are going to view historical and architectural localities, with then going to the Heydar Aliyev Cultural Center. It is known to be the most popular place of the modern part of the city, being created by architect Zaha Hadid. Here there are often held excursions of historical meaning, which show up the history of the country. This is the center with fantastic views of panorama, as you are able to have a walk along the green landscapes of the center of Aliyev. Night is taken in the hotel.

Day 2: Baku
As we have seen main places of the modern part of the city, now the way is made along the old town. It is seen as the center, the very heart and treasure of Baku, the Icheri Sheher area. It is known to be surrounded by the fort. At the same time such historical locations as the Market Square, Juma Mosque, Synyk Gala Castle, Caravanserais, baths, Maiden Tower of the XII century, residential buildings and the Palace of Shirvan Shakhov of the XV century are going to be visited by the group this time. Have a view of the Ali Shamsi Workshop, as here there are lots of exhibits of historical meaning. At the same time then we get to see it for the reason of being UNESCO historical heritage and then getting for lunch. In the evening you are able to have a walk along the city and be amazed by the beauty of night city. Night is taken in the hotel.

Day 3: Baku - Gobustan - Baku
Your day starts early in the morning and it is made in the Bibi-Heybat complex. The complex is also known for mosque. This mosque is known for the tombs and the grave of Ukeima khanum. This is a famous Prophet Muhammad, well known for the local people. As we have a tour along the country, guests have a trip to the "Gobustan Reserve of rock carvings", where there are lots of exhibits like 6,000 rocks, being 30,000 years old. This time we are in Gobustan. Then the road of 10km is taken to active volcanoes of Absheron, after it lunch and of course the route is taken to the Carpet Museum. And here we are in Baku already. This is the museum where there are different collections like ceramics, metal and bronze jewelry, metal items of the 14th century, carpets and rugs of the 17th-20th centuries, gold and silver jewelry, national clothing and embroidery, basically about 10,000 items. Night is taken in the hotel.

Day 4: Baku - Lankaran (Girkansky reserve) - Baku
Our team wants to make the way to the Hirkan Nature Reserve, as it is famed for being the Representative List of the Intangible Cultural Heritage of UNESCO. At the same time it is the natural territory, where subtropical forests exist, as well as showing the changing zone of the humid to dry subtropics. Moreover, fauna and flora is rich here and we are glad to take you to the zones where boxwood, ironwood, velvet maple, giant figs, silk acacia and other 1900 kinds of plants can be met. But about 160 ones can be found only in the Talysh mountains. As for the animals, leopard, the Caucasian lynx, the stone marten, the porcupine, the Talysh spotted woodpecker, the Iranian robin, the Persian snake are magnificent ones living here. Having taken great emotions, we have lunch in the local restaurant. For this you can order a folklore and dance ensemble Nyanyalar (Grandmothers) for additional payment, and then the return to Baku is planned. Hotel is ordered there for night.

Day 5: Baku - Shemakha - Gabala - Sheki
As we still are in the capital of Azerbaijan, now the tour is made to Shamakha, where there is a famous wall of Sheikh Diri Baba's rock-cut mausoleum located. More detailed placement is the Maraza village, also serving as the symbolism of geometric shapes. In the course of the trip here, many legends will be surely told to you. The next destination is known to be Shamakhi, as a famous heritage of the country. Such glorious places as Juma Mosque is seen here, and then the route is aimed at the Gabala village. In the village you can find the Albanian church of Nij village as well. It is seen as the locality of the Udins living here. The Udins are the community of 26 Albanian tribes creating the Albanian state of III century BC - VII century AD. Later on the Aspi Winery is visited by us, where we can try wine and have lunch. Hotel is ordered in Sheki for night. But first we get to the local restaurant and have dinner listening to national Mugam music.

Day 6: Sheki - Baku
We are going to return back to the principal city of Azerbaijan and now the trip is made to the splendid landscapes of the 700m. Here the territory is covered with the mountains and oak trees. During this tour you are going to visit the Shebeke workshop, where all can try to cook the local Sheki Halva. As we move further, the village Kish, Caucasian one, is the goal of the day. Concerning some historical ideas, it used to be the capital of the local khanate of the past times. Then you have lunch and take the way to the Sheki Ipek Silk Mill. And here the pride of the whole country and the local people can be seen, kelagai - also known as the headscarf made for women. It is the cloth of the Representative List of the Intangible Cultural Heritage of UNESCO. In Baku night is spent in the hotel.

Day 7: Baku - Absheron Peninsula - Baku
According to the local dwellers, there are lots of historical sites, such as village Gala. It is famous for the Historical and Archaeological Museum, which is located under the open air. This is identified as the historical location being famous even since the 5th century, as well as the local fort. Here guests have a walk and view the antiques of the museum. Little later the trip is organized to Ateshgah Temple of Fire Worshipers, where the eternal flame always burns. For guests lunch is served and later the outing is made to Yanardag - Burning Mountain. Having arrived at  Baku, invitees get to the local bazaar and then have night in the hotel.

Day 8: Baku - Airport
Breakfast in a hotel is organized. Airport transfer is also planned for the guests.