Any tour in Kyrgyzstan is made without the trying of traditional food of the local people that is why we are glad to offer the cars renting service for having a chance to get to various destinations. It is also known that the locals had the nomadic way of life in the past times and this seems to be the starting point for the modern cuisine to appear. Basically in the country there are various customs looking at the cuisine, as being gathered from Turks, Persians, Arabs, Indians, Chinese, Russian, and Europeans. As you have an aim to travel in Kyrgyzstan, we have decided to give the short list of main cuisine points in this article:

Bread
As in many countries bread takes a highly important and significant meaning, our country is not the exception and people greatly respects bread. In the nomadic past bread is not cut, but tore and eaten with hands. Also, there is a sort of the ritual of placing it not upside down. The famous kinds of bread are lepeshka and boorsok. The first is round bread cooked in tandoor, and the second one are small pieces of bread made in oil.

Beshbarmak
Today it is identified as the main meal of the local people, especially being taken from the nomadic life of the ancient past times. This is going to be the way of meal, when having washed the hands you eat with them, having said the words of pray. The Kyrgyz people are said to eat it sitting close to each other, discussing various ideas. It is mainly made of mutton, onions and dough.

Chuchuk
There are of course the delicacies in Kyrgyzstan, and now we would like to offer the pleasure of trying chulchuk. It is identified as the set of special meal created for holidays and tois. Here there are various constituents, like kazy kabyrga (ribs), ulcers, salt, paprika, black pepper, onion, garlic, cumin and bay leaf.

Kuurdak
Going on we would like to show the idea of trying kuurdak, or the meal made of beef or lamb, potatoes and onions. For the nomadic tribes it is the usual meal, mainly cooked on special metal. But the cooking on the stones shows the exquisite taste.

Shorpo
The soup shorpo is mainly created out of meat, herbs and vegetables. It is well popular in the east of the world and famous for the red pepper, as it makes the taste extremely unique. Also there can be added some new ingredients for the taste being rather unique at the most.

Plov
Plov is the famed meal not only in our country but also in many different countries. It is known to be famous in the Asian countries, taking the place of the main meal on weddings, funerals, birth of a child. It is also often cooked by the housewives in the homes for the locals.

Samsa
In the course of the car rent tour guests have a chance to eat samsa, especially when the wander about the mountains of the state. It is seen as a sort of the pie made with meat, onions and of course species. Also it is cooked in tandoor or stones, mainly made from chicken.

Manty
For the traditional meal of the local people, manty take a highly important place, as tends to be the main dish of many of the local families. They are better to be eaten with hands, when the big dish of the manty is put in the center of the table. Basically it is seen as the dough and meat, made on steam.

Lagman
For all of the people of Central Asia, lagman is a highly famous dish, being made of lamb and vegetables, noodles. As for the noodles, these can be cooked as well as bought. The dish is usually cooked with the great amount of water, but not really being the soup. As for the other ingredients, peppers, eggplant, beans, radishes, onions, carrots are added.

Ashlyam - Fu
Hello friends, and be the ones to eat the most famous dish of Karakol. It is offered to the guests when they travel in this city, as this is the traditional dish of the Kyrgyz people. By the way, the serving of it is cold, extremely great in summer. The constituents are noodles, starch, and sauce, vegetables. It can be also met in the cuisines of Dungan, Chinese Muslims.

Shashlyk
Shashlyk is identified as the meal of many religions and nations, and known to be popular being cooked in the fire. Today it can be ordered in restaurants and café. As for the name of the dish, it goes from the Turkic culture. The meat is marinated with the sauce, species and vegetables.

Dymlyama
Dymlyama is seen as the meal cooked in the great cattle, when different ingredients are mixed with each other and they are presented with lamb meat, onions, potatoes, tomatoes, bell peppers. But do not stir the ingredients, just mix.

Ganfan
As for the Eastern cuisine we take the Ganfan. It somehow reminds lagman, but cooked with not great amount of water, but with vegetables, spices, noodles. Except the noodles we can take rice. It is also known as the decoration of the table while the family celebrates something.

Borsch
Of course due to the living of various nations at the territory of the country, the cuisine is also mixed by the people. Borsch is the dish of the Russian, Slavic origin, but already cooked by the Kyrgyz families. It seems to appear due to the good relations among the people of different traditions. It can be also tried in the local restaurants. As for the ingredients, there are beef, vegetables, beet.

Cutlets
The other dish of our nationalities, we identify cutlets. People here live among different cultures and traditions and seem to have  exquisite cuisine. Cutlets for example are known to be of the French cuisine, of ribs of meat. Meat can be of chicken, turkey and beef, potatoes, onion.

Kurut
As for the snacks of the local people, made in the domestic conditions, kurut is the most famous one here. It is known to be created from milk, made in the balls. These are the salty and creamy ones, sometimes spicy. Be sure of it being the decoration of the any table. When boarders return home, they tend to take these snacks with them.

Mampar
The popular soup of the local people, of the people of Central Asia, we see the mampar. It is known to be made in the boiled dough with onions and potatoes. It can be also cooked as the precious decoration of the table on celebration of something.

Pelmeni
As we have mentioned, there are connections with the other nationalities and we are going to show the Slavic dish pelmeni. This is the dough with meat inside, boiled and cooked in the water. The serving of the dish is made with sour cream, ketchup, mayonnaise. 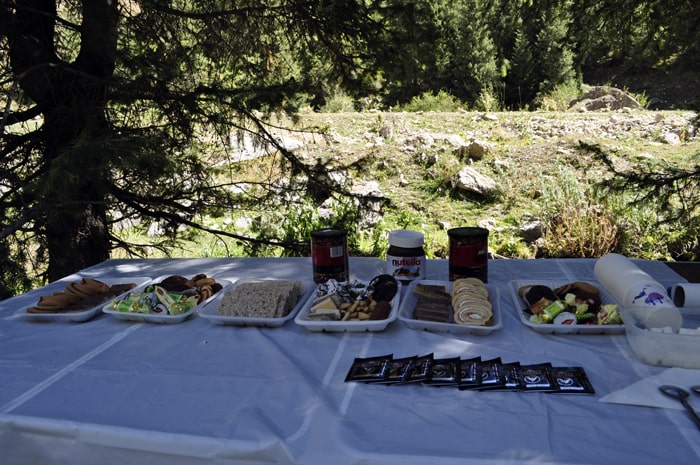