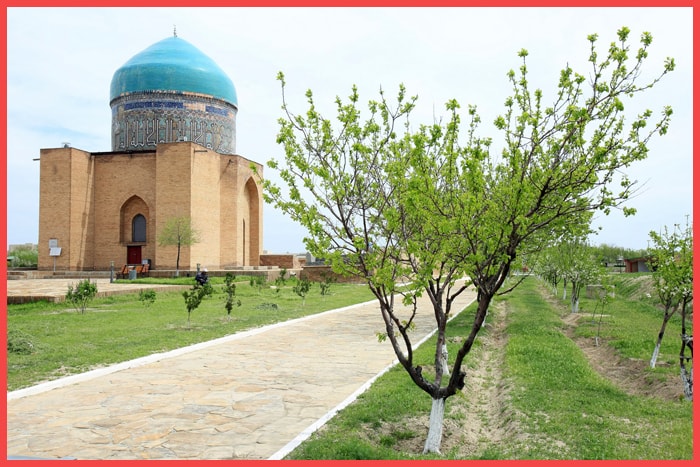 Day 1: Almaty - Shymkent
The first day will be oriented to the investigation of Almaty. We can say that it is the perfect city for the people to go sightseeing. And the guests come to the airport and then get to the city Shymkent, the way to it takes about 4 hours. This city is the one set at the crossroads of the Great Silk Road. And we can freely say that the trip is made along the ancient places as Otar, Turkestan, Syganak, Sauran. The city of Shymkent is the center of historical  and touristic reasons. The places recommended for a tour is Memory Alley in Park named after Sh. Kaldayakov, Monument "Jer An", Ordabasy Square, Park "20th Anniversary of Independence of the Republic of Kazakhstan", Museum of political repression victims, Obelisk of Glory, Walk of Fame, Eternal Fire to the fallen in the Second World War, Arboretum and historical museum. You will surely be amazed.

Day 2: Shymkent - Turkestan - Shymkent
This day will be made the one of the mist fantastic ones, the way to Turkestan from Shymkent. The history tells that it was created in 500 AD. And it was based at the sites of caravans going along the Great Silk Road. And the routes from Samarkand, Bukhara and Khiva to northern Kazakhstan were made here. This is the site of the former capital of Kazakh Khanate, with the majority of the people speaking Turkic. There is the mausoleum to Sufi sheikh and philosopher Khoja Ahmed Yasawi. As it is considered to be the building of great architectural meaning, it still is the center of worship for Muslims. There are legends of its creation and the guides will tell during the trip the boarders travel. Moreover, we offer the opportunity to visit the architectural building of great historical significance as "Azret-Sultan". It is the Mausoleum of Khoja Ahmed Yasawi. The night will be made in the hotel.

Day 3: Shymkent - Almaty
The last day of the trip will be in the city of Almaty. And before leaving the city, you will be able to take the 5 hours tour. The trip will be made along with giving the historical facts, with visiting the Green Bazaar. This Bazaar is colorful and busy all the time. Being here we suggest to bargain. And the guests are free to go sightseeing, Almaty parks as Panfilov Park as well as Zenkov Cathedral, Memorial of Glory and Eternal Flame, Medeo Gorge. Our team wants you to take a way to the Kok-Tobe hill, with the TV tower, biggest in the world. It is the panorama of the city. Then the group gets to the city of Almaty. Night is organized in the hotel.

Day 4: Flight
Transfer to the airport