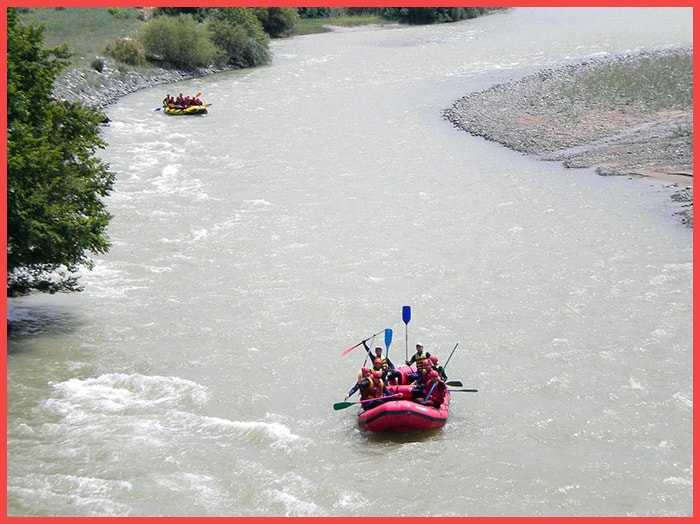 If you adore rafting,  Kyrgyzstan is just the right place to do that! We have dozens of mountainous rivers that are famous among the rafters. Rafting in Kyrgyzstan is one of the most accepted activities. Take your chance - come for rafting to Kyrgyzstan! You will spend a fantastic time and get a lot of new emotions.

Due to the unique natural environment of the republic, there are many rivers to provide routes of different categories of the complexity suitable for experienced sportsmen and beginners. The great amount of Mountain Rivers and clear days attracting fans of white water rafting since the 2nd half of the last century.

There is nothing more exciting than a white water rafting tour along the Mountain Rivers! Everything that is required to make your holiday unforgettable is here...rivers quietly flowing through the beautiful landscape, and rapids that will take your breath away and excite even the most hardened extreme sports fans.  In Kyrgyzstan, the best rivers for this type of travelling are the Chu, Chon - Kemin, Kekemeren, Naryn and Chatkal. The rafting season varies from April to October. The level of complexity depends on the season, since the melting of glaciers ensures a high level of water in the rivers; and in hot summer months the water level can vary daily. Therefore, for some rivers, the most appropriate time for water tours is the end of August, and September.

In Kyrgyzstan rafting started to develop a quarter of century ago. Its future fate rested upon the enthusiasm of some junior rowing league coaches. In 1992 rafting adopted a commercial direction by receiving the status of strategic objective for the development of tourism in Kyrgyzstan.

During the Soviet Union the most popular were many-day tours on the Chatkal, Kekemeren, Naryn rivers. The Chatkal river was included in five the most popular rivers in the USSR. Usually, during August and September, there used to be 60 or 70 tourist groups here. For the last several years, one-or two-day tours on the rivers Chu and Chon-Kemin have gained the same popularity.

In spite of the half-century history of exploring the Kyrgyz rivers by the white water lovers, lots of rivers still remain unaware of rafts and kayaks. There are lots of opportunities for pioneers to travel down the rivers, starting from their source. The most impressive is the rafting tour from Inylchek, the second biggest glacier in the world (59km), through the almost impenetrable Sarydzhaz canyon, 30km long, or from the source of the Naryn that is the upper course of the 2nd longest river of Central Asia the Syr-Darya. The most well-liked among the travelers, through their gentle climate conditions, are the rivers that aren't higher than at the altitude of 1500m. a. s. l. Professionals confidently compare some sections on the, Kekemeren, Naryn, Chatkal rivers to the world famous the Colorado in the USA and Futalefu in Chile.

The Chu River is the most suitable for commercial rafting. Parts of it lie at over 1,500m. a. s. l. The climate and temperature of the water (15°-18°C) from June till mid-September rafting can be done even without diving suits, and the complexity of obstacles does not exceed five points. The section of the river passing through the Boom gorge is the national white water unique training site and sports arena for the whole Central Asian. Here in ancient times there lay one of the northern routes of the Great Silk Road. Due to its location close to the capital city of the republic and interactions development over the years, the popularity of white water rafting in the Boom Gorge is gradually growing as well as among the people of the country so foreign guests.