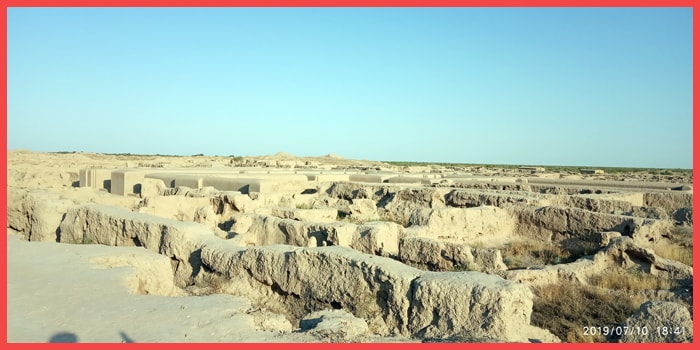 Day 1: Ashgabat - Darwaza
The very start of the tour in Turkmenistan begins with the meeting of the guide, and transfer to the city of Ashgabat. Right here we see the territory of the UNESCO World Heritage site, the Old Nisa. Today it is the Sanctuary of Parhian Kings. The popular sites of the city are the "Gypjak" Mosque and Mausoleum of the previous president of the country. Then goes the lunch and exploration of the Karakum desert to Darwaza crater. Being here you will be able to feel the heat and listen to the sounds of wind. The night will be in the yurt after picnic.

Day 2: Darwaza - Ashgabat
From the crater we return back to Ashgabat and continue the exploration of the popular city of Turkmenistan. The tour starts with the guests travel to the Ertugrul Gazi Mosque, Lenin monument and the Russian Bazaar. The first site is the striking place bearing the historical meaning along with the religious one. As it was created in 1990, it was able to room about 5000 people. The Lenin monument was set in honor of the head of the proletariat. The bazaar can show the life of the local people, just immerse in it. Then starts dinner and the hotel will be ordered for you.

Day 3: Ashgabat - Mary/Merv
After the Ashgabat city, the guests travel to Mary city. Here we need to see the Annau, where the remains of the Seyit Jamal-ad-Din Mosque are located. They take the history of the 15th century. Then goes the journey to the ancient Sassanid city, Abiward or Abi-ward. There have been made excavation works, revealing the remains. Basically it is located in 8km of the Kahka station. During the tour you will see its 12,000 square km territory. Then we travel to Merv city. It is just at the cross of the Great Silk Road, with the biggest mausoleum of Sultan Sanjar and Muhammed ibn-Zeyd. The building is a true destiny of the 12th century. The night will be in the hotel.

Day 4: Mary - Ashgabat
The tour of Turkmenistan continues with the coming back to Ashgabat city, the city rather young. It even was included in the Guinness Book of Records in 2013. The reason was that in the concertation of the marble buildings. Basically the city was created in 1881. The day continues with the lunch of traditional food and then there will be the accommodation, with the opportunity to go sightseeing, along parks and monuments. The night will be in the hotel.

Day 5: Flight
There will be transfer to airport at night.

Note: All coming need to have 2 photos (5×6) for been asked and given to the ones needed.